The US ethanol industry sounded elated last week when the Trump administration unveiled long-sought reforms to shore up biofuel demand, but the reaction in the markets has been less enthusiastic.

The price of compliance credits used in ethanol markets has fallen since Friday’s announcement by the Environmental Protection Agency, reflecting questions about the details and doubts it could drive greater sales, analysts said.

Most petrol sold in the US contains about 10 per cent ethanol. The commodity is of huge economic importance in Midwestern US states, where more than a third of the corn crop is sold to ethanol plants. These states, in turn, are crucial to Donald Trump’s re-election prospects in 2020.

Mr Trump’s EPA on Friday announced a plan to push ethanol demand to 15bn gallons a year — the level required by a congressional mandate — in 2020 after previously punching holes in the mandate by giving exemptions to dozens of oil refiners. 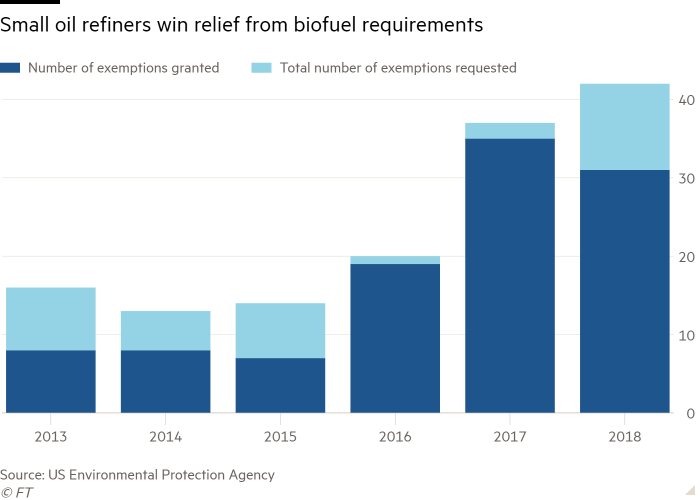 If successful, the plan would soften the impact of the exemptions on ethanol demand, pushing up the price of credits that oil refiners purchase to meet blending requirements. The credits are formally known as Renewable Identification Numbers, or Rins.

But after Friday’s announcement, the Rin credits “have been falling off a cliff”, said Denton Cinquegrana of Opis, a fuel price information service.

The price of ethanol swaps was $1.485 a gallon in Chicago on Monday, down 2.3 per cent from Thursday. Corn futures also settled at $3.87 a bushel, slightly lower than Thursday.

The EPA this week plans to formally propose the expanded biofuel requirements, according to an agency official. In its announcement last week, the EPA said that it would “seek comment on actions to ensure that more than 15bn gallons of conventional ethanol be blended into the nation’s fuel supply beginning in 2020”.

Biofuels industry leaders are optimistic that the 15bn-gallon target would be met, even though US ethanol consumption is about 500m gallons less than that. It would require pushing the national rate of ethanol blending above the customary 10 per cent of petrol to 15 per cent by using a fuel called E15, said Todd Becker, chief executive of Green Plains, an Omaha-based company with 13 ethanol plants.

Selling more E15 at forecourts “will be the legacy of this agreement and will change agriculture in our lifetime. The only place that corn demand will grow for farmers will be ethanol demand,” Mr Becker said.

Others in agriculture are less sure. The EPA’s statement “is certainly appealing and appeasing to the ethanol lobby,” said Richard Feltes, vice-president at RJ O’Brien, a commodities broker. “I would say the rest of the marketplace is going to hold their breath. They’re not going to want to believe it until they see it.”

Scott Irwin, an agricultural economist at the University of Illinois, said expanding sales of E15 would face difficulties, such as the small number of petrol stations offering it. “I just don’t see any way you could get to 15bn [gallons] or above on actual physical ethanol consumption in 2020,” he said.

For more information, please go to: