It looks like next year might be a good time to cut the carbohydrates as a drought-fueled jump in wheat costs will make bakery goods the food items with the biggest price gains for U.S. consumers.

Higher prices paid to farmers, combined with lower imports, may increase grocery and restaurant costs for baked goods and cereals as much as 4 percent next year, the U.S. Department of Agriculture said Tuesday in its first forecast of food-price inflation for 2018. Price gains will vary across foods, with increases in some products more dramatic than others as the type of wheat used varies.

"Not all wheat is created equal," said Bill Lapp, the president of consulting firm Advanced Economic Solutions in Omaha, Nebraska, and a former chief economist for Conagra Brands Inc. "Pizza dough and bagels will be up significantly, wheat flour not as much." 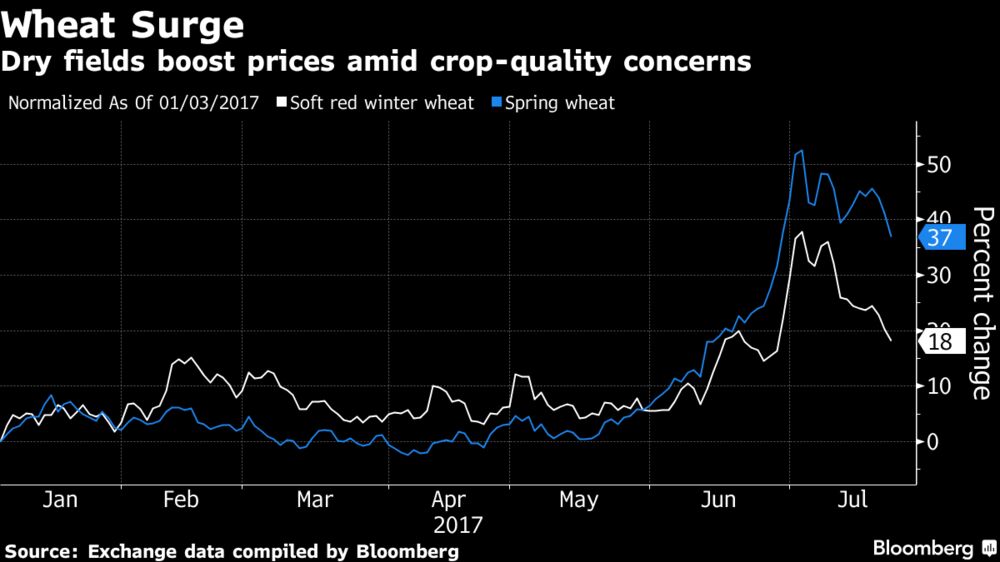 Benchmark wheat futures traded in Chicago jumped more than 30 percent from April 25 to July 5 as drought on the northern U.S. Plains ravaged spring varieties. While prices have since fallen, they’re still up 18 percent for the year, causing a ripple effect that will find its way to grocery stores, the USDA said.

Dry conditions will continue across eastern Montana, western North Dakota and western South Dakota through October, the U.S. Climate Predication Center said in a seasonal drought outlook report issued last week. The region is a key growing area for spring wheat, a high-protein variety favored for bagels and pizza crusts. Prices for the crop traded in Minneapolis have climbed 37 percent this year.

The USDA also expects inflation to quicken for beef and fresh fruit next year after some declines in 2017. Costs for eggs, which are forecast to drop as much as 9 percent this year, will rebound in 2018, climbing as much as 2 percent, the agency predicts.

The 2018 forecasts are based on assumptions that weather will be normal for the remainder of the year, the USDA said in a document accompanying its price forecasts. Currency fluctuations may also change predictions, the report said.

"Severe weather or other unforeseen events could potentially drive up food prices beyond the current forecasts," the USDA said. "Also, a stronger U.S. dollar could continue to make the sale of domestic food products overseas more difficult. This would increase the supply of foods on the domestic market, placing downward pressure on retail food prices."

Before it's here, it's on the Bloomberg Terminal: https://www.bloomberg.com/news/articles/2017-07-25/hold-the-bagel-higher-costs-make-2018-a-great-time-to-cut-carbs