The merest mention of bird flu is enough to send shivers down the spine of a chicken farmer. But as the U.S. deals with its first case of highly pathogenic avian influenza on a farm in a year, the poultry industry hasn’t started to panic.

Learning lessons after the worst-ever U.S. outbreak two years ago, America’s chicken, turkey and egg producers are gearing up with tighter biosecurity measures and quicker quarantines to deter spread of the infection. One thing working in their favor: early spring-like weather in the region that can stop the virus from thriving.

A U.S. outbreak of avian influenza in 2015 wiped out more than 48 million birds through infection and culling. The scourge that year sent egg prices soaring and prompted countries around the globe to ban U.S. shipments of poultry products. Exports have only started to recover, and another epidemic would threaten the livelihood of farmers at time when agriculture incomes are slumping. South Korea and other countries have already placed some restrictions on American shipments.

The latest U.S. case also comes at a time when the virus has spread in parts of Asia and Europe. Singapore said on Tuesday that it will impose temporary restrictions on the import of poultry and poultry products from affected Tennessee and Wisconsin farms. 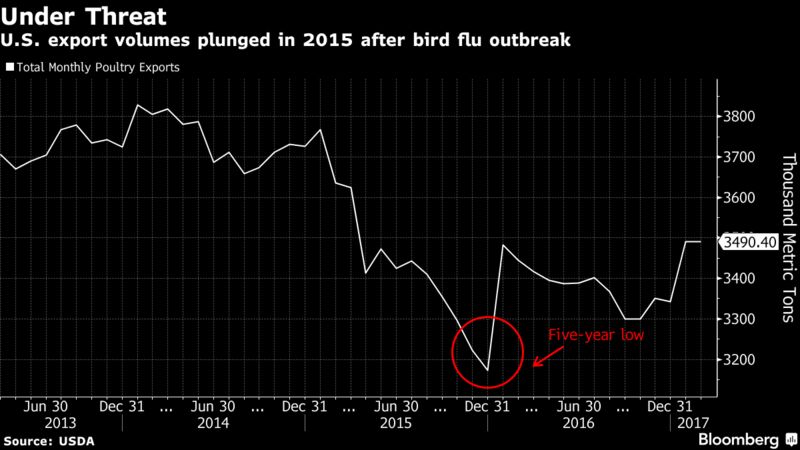 After a fairly dormant cycle last year, the highly contagious H7 strain of the virus was confirmed Sunday at a southern Tennessee chicken-breeding operation that supplies Tyson Foods Inc. Making matters worse, the state borders several of the nation’s largest chicken-meat producing states, including Georgia, Alabama, Arkansas and North Carolina. The virus is believed to spread partly by migratory wild birds, posing the risk it may reach other farms. Still, the industry is confident in its new security procedures.

“It’s hard right now to hit the panic button because we know we’ve had these wild birds circulating all winter -- it’s a hold-your-breath situation,” said Brett Stuart, founding partner at Denver-based Global AgriTrends, a market researcher. “The fact we’ve made it this long is very impressive. It speaks to the biosecurity efforts of U.S. producers.”

The affected Tennessee operation is now under quarantine and the 73,500 chickens at the farm have been destroyed. The risk of human infection is very low, the state’s agriculture department said in a statement March 5. Springdale, Arkansas-based Tyson said all flocks within a six-mile radius of the farm will be tested and won’t be transported unless they test negative for the virus.

That’s likely to be just the beginning of the cautionary measures.

Since the 2015 outbreak, the National Chicken Council has encouraged farmers and companies to take several measures to prevent the spread of the virus, according to Ashley Peterson, the group’s senior vice president for scientific and regulatory affairs. Along with cleaning, disinfecting and limiting access, the council’s recommendations include discouraging hunting of ducks and geese to avoid contact with infected waterfowl, as well as not sharing equipment between farms, she said.

The discovery of infected birds on the Tennessee farm underscores that producers are paying closer attention to threats from the virus, and the case likely means the poultry industry is “going to double down” on those efforts now, Peterson said.

U.S. poultry producers invested millions of dollars to boost biosecurity in bird houses and increase their ability to respond to incidents, said Will Sawyer, an Atlanta-based vice president of animal protein at Rabobank International. Unlike two years ago, companies can now depopulate birds and clean up themselves when the disease is detected, as opposed to waiting for the U.S. Department of Agriculture, he said. Producers have already been using heightened measures for a few months, because of the seasonal risk. The virus survives better in colder weather.

“One thing that was a very important lesson from 2015 -- the longer the active virus is exposed in the air and at a farm, the more houses and production in that region become affected,” Sawyer said. “There’s no waiting around anymore.”

This week’s case hasn’t affected chicken prices yet, said Russ Whitman, vice president at commodity researcher Urner Barry in Toms River, New Jersey. But that could change. South Korea’s agriculture ministry already banned shipments of poultry and eggs from the U.S. unless they’ve been heat treated. Canada and Japan have also placed restrictions on shipments. Some countries may ban poultry on a regional basis, while others may take broader strokes and ban products from the whole country, Whitman said.

In Tennessee, the next steps will be continued testing and surveillance around the affected farm, the state’s veterinarian Charles Hatcher said in a video posted online. If any further positive cases are found, the infected flocks will be destroyed, he said.

About 30 nearby poultry farms are under quarantine, according to the Tennessee Department of Agriculture. The infected farm is located in Lincoln County, which borders Alabama. That puts the neighboring state within the control zone and officials there have tested about 15 farms, including another Tyson farm, according to Alabama’s agriculture department. Samples from the company’s farm were negative for the flu, the state agency said.

Other major producers are closely monitoring the situation.

While Sanderson Farms Inc. doesn’t have operations in Tennessee, it is banning company vehicles from traveling near the quarantined area, according to Chief Financial Officer Mike Cockrell. If an outbreak occurs near one of their farms, there will be more drastic measures, such as limiting travel of those coming into contact with live birds and disinfecting all vehicles coming onto the farm, Cockrell said.

Pilgrim’s Pride Corp. has activated response plans with “heightened on-farm biosecurity programs” at all of its facilities, even though none of the company’s operations are located in the area under quarantine, spokesman Cameron Bruett said Monday in an email.

Last year, there was just one commercial instance of bird flu in the U.S., at an Indiana turkey farm. The case was rapidly contained, giving the industry reasons to believe any government response will be “aggressive and thorough,” said an analyst at Advanced Economic Solutions in Omaha, Nebraska, said by phone. The unusual warm weather this winter also decreases the chances of the disease spreading, as the virus thrives in cold, wet environments, he said.

Even with all the vigilance, nothing is bulletproof, said Tom Elam, Carmel, Indiana-based president of consulting firm FarmEcon LLC. After all, it’s March, and the wild birds are migrating. Bird flu has been breaking out around the world, from Europe to China.

Companies “are as ready as they’re going to get, but all it takes is one mouse to get into that broiler house and track in a virus, and the stuff is pretty virulent,” Elam said. “It’s not a surprise it’s back.”

For more information, check out the link: https://www.bloomberg.com/news/articles/2017-03-07/bird-flu-prompts-quick-quarantines-as-chicken-farmers-fight-back